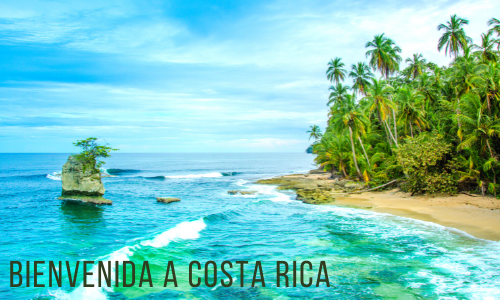 Pura Vida! Not just a phrase, but a lifestyle for Costa Ricans! The pure life, the simple life, the carefree, long walks on the beach, with the breeze blowing gently across your face kind of life. Perhaps this is one reason why the people here are so happy, letting go of the stressors of the world. Maybe it’s the captivating waves on the crystal clear waters, the rich wildlife in the dense rainforest, or incredible volcanoes! What is not to love here!? The beauty of this place is amazing, but what is even more amazing is that we serve the God of the universe that carved every mountain and formed every rainforest and its inhabitants here! As you venture through Costa Rica and get lost in all its beauty and splendor, don’t forget who formed this land! Have fun!

Costa Rica is filled with kind and happy people (which you find further down the page), but their own happiness and pursuits that they are chasing after in the world, are only temporary. They are in need of the true and eternal joy, that can only come from Jesus! The Costa Rican people do not shy away from religion entirely, but they are more devoted to things that are fleeting. Take a look at this sweet missionary family in this video that are living on mission for the gospel in Costa Rica. 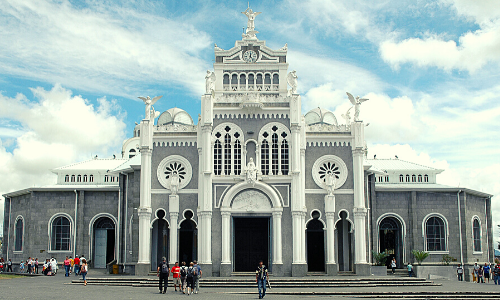 Costa Rica is heavily influenced by Catholicism, which can be traced back to the 1500s when this land was discovered by the Spanish. Today, the official religion of Costa Rica remains Catholic. The country’s stunning cathedrals are visited by thousands of tourists each year. Magnificent architectural structures, adorned with stained glass and beautiful artistry, these houses of worship are a sight to be seen! While one can appreciate architecture and design, the message that is shared inside remains the most important. Many in Costa Rica consider themselves Catholic based on their family heritage, rather than being a practicing Catholic. The statistics below help demonstrate the need for the sharing of the gospel:

Numbers are certainly important and are a piece of the puzzle in determining where would be best to plant churches, but there is so much more to it. Getting to know the country, the people, and understanding their culture is vital as well. The people of Costa Rica are not just a statistic, they are sinners in need of a Savior, just like us! Keep scrolling down the page to learn a little more about Costa Rica. 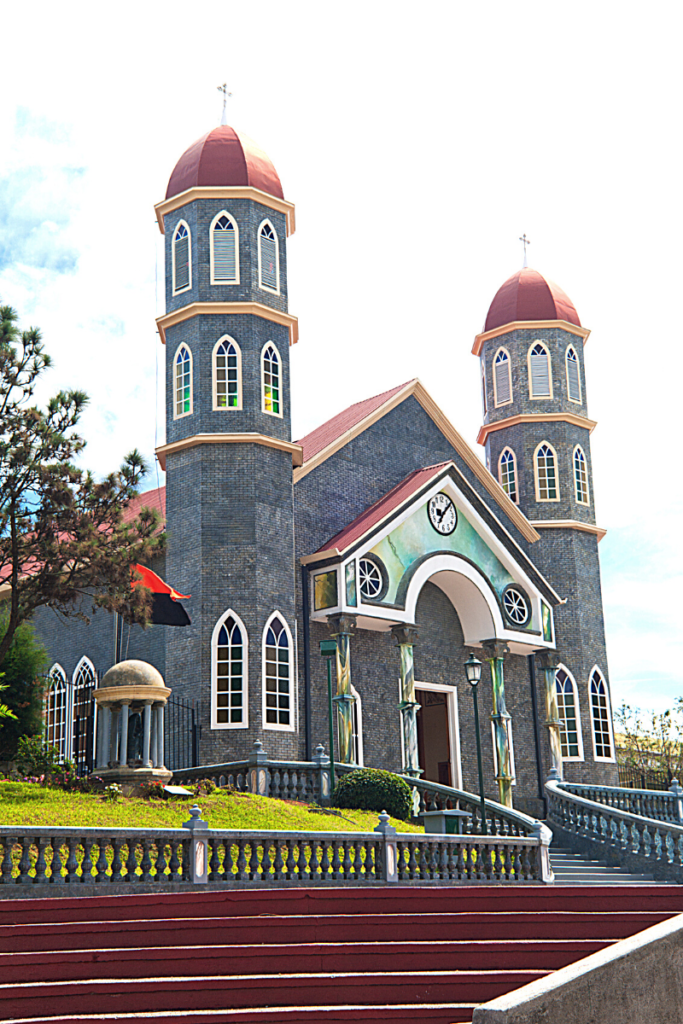 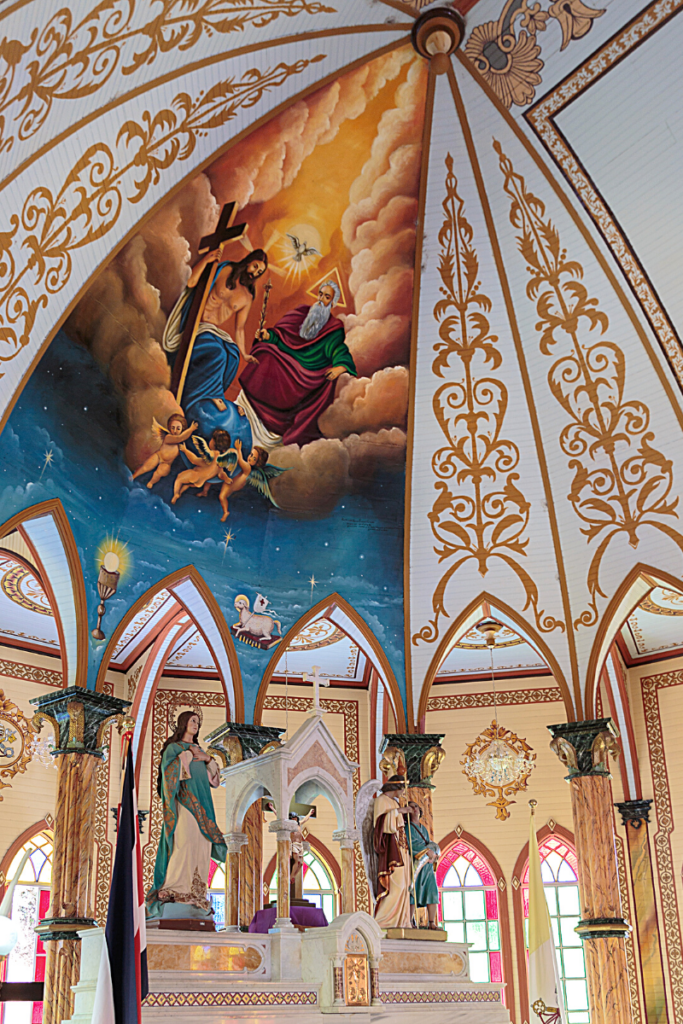 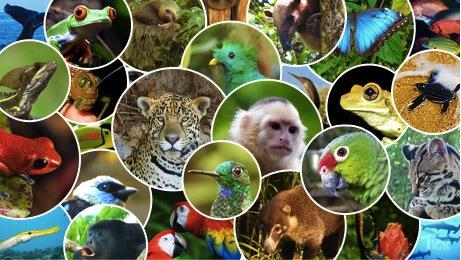 Costa Rica is made for adventure and exploration!

Costa Rica hosts more than 5% of the world’s biodiversity even though its landmass only takes up .03% of the planet’s surface. There are more than:

The Happiest Place on Earth!

Not only is this region home to a thousands of different plant and animal species, it is also known for being the happiest place on Earth! You thought it was Disney World… but Costa Rica is the place to be! 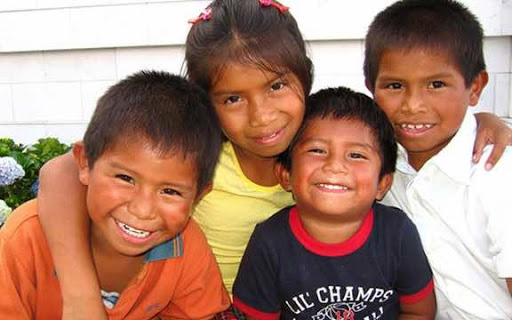 Costa Rica has a population of 4.5 million and a life expectancy of almost 77 years, one of the highest in the world. Costa Rica ranked first in Latin American Happiness and 12th in the world, according to the 2017 World Happiness Report. The country was even ranked No. 1 in the world by The Happy Planet Index! Pura Vida!

The food in Costa Rica is a beautiful blend of cultures, and most heavily influenced by it’s Spanish and African heritage. Having access to fresh vegetables, seafood, and rich farmland is a big added bonus! Take a look at some of their most popular dishes below.

Gallo pinto (rice and beans)
Literally translated, “spotted rooster,” this is the national dish of Costa Rica. It’s a perfect blend of rice, black beans, onions, red pepper, garlic, and cilantro. This dish is most common at breakfast paired with eggs, plantains, tortilla, cheese, and fresh Costa Rican coffee! This mouth-watering dish can be made right in your very own kitchen! Click the picture to get the recipe for yourself. 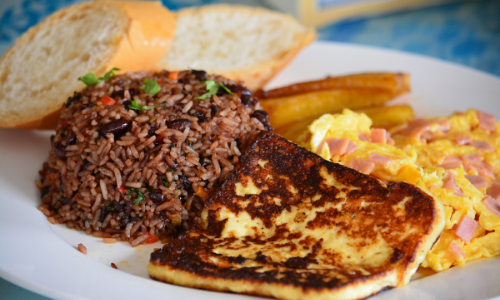 Patacones
Fries so nice, you do it twice! Seriously, these twice-fried plantains are a favorite in Costa Rica. They are typically served with salsa and guacamole for dipping. However, they are often times smothered in cheese, ground beef, sour cream, and fresh pico de gallo. 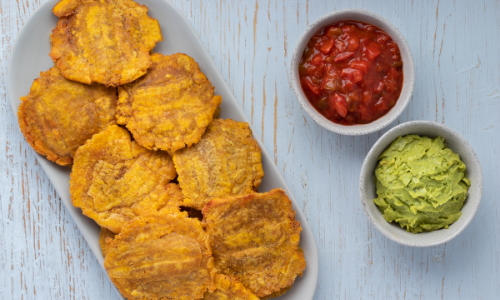 There are so many other dishes to explore and here are few more that the locals love!

We can’t forget about beans! Beans, beans, the musical fruit, the more you… no! no! no! Not those beans.. COFFEE BEANS! If you’re a coffee lover, then Costa Rica is the spot for you. They are VERY serious about their coffee and quality is king! In fact, a law was passed in 1989, banning the production of anything other than 100% Arabica beans. This is the highest quality bean that produces the best coffee, and people can’t get enough of it. 90% of the coffee out of Costa Rica is shipped out of the country and spread all over the globe. So the next time you’re at your local coffee shop, try a single origin cup from Costa Rica! 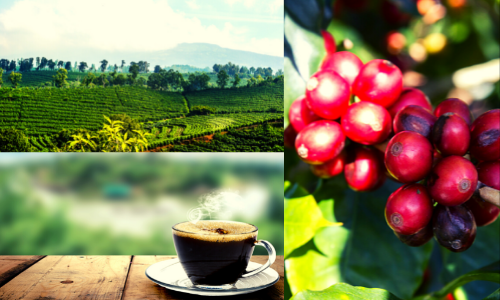 How can you pray for Costa Rica?